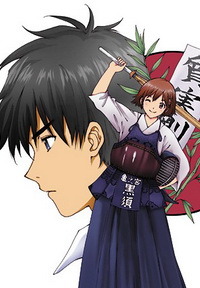 Bamboo Blade C is a manga series by Masahiro Totsuka and illustrated by Takao Jingu It is serialized in Square Enix Monthly Big Gangan since May 2013.

Ever since middle school, Suzuharu Sakudou has never won a competitive kendo match which makes him want to quit kendo in high school. But, he reluctantly keeps on doing kendo simply because he can't say no to his childhood friend, Chiko, and all of his senior in the kendo club. After hearing this from Chiko, Kiki Asahina, a retired kendoka who used to be the country 2nd best in the middle school level, decides to beat some sense into him. However, Suzuharu actually defeats her. Amazed by his potential, she offers herself to coach him and entrusts her dream to become number one in Japan to him.