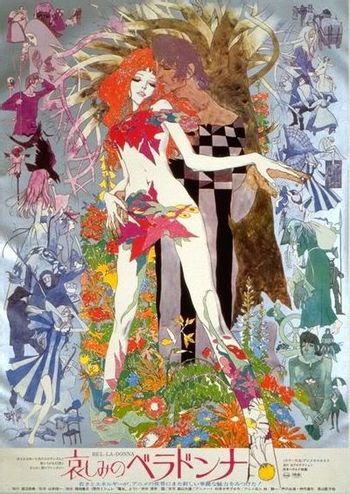 Jeanne (voiced by Aiko Nagayama) is a peasant woman who has just been Happily Married to Jean (voiced by Katsutaka Ito). However they can't pay the absurdly high marriage tax, so the baron (voiced by Masaya Takahashi) sees fit to have his way with her.

When she returns home, she is seduced by the Devil (Tatsuya Nakadai) then finds herself gradually turning to witchcraft to find empowerment and freedom.

At first, she and her husband are prosperous but as famine, war, and The Black Death strike the rest of the village, suspicion grows and she is eventually cast out of the village.

She wins the villagers over when she offers a miracle cure for The Black Death, but then the nobility catches wind of her power...

Belladonna of Sadness (Kanashimi no Belladonna, also known as The Tragedy of Belladonna) is an avant-garde anime film made in 1973, and the final installment in the Mushi Productions' Animerama trilogy that was started by A Thousand & One Nights. Inspired by… Jules Michelet's non-fiction book, Satanism and Witchcraft

(or La Sorcière), the film was directed by Osamu Tezuka's disciple, Eiichi Yamamoto, and produced by Tezuka's studio, Mushi Productions.

Although the film was initially a commercial failure, it has gained some recognition in anime circles for its experimental animation, which is full of beautifully painted still images, Gustav Klimt Art Nouveau inspired imagery and heavily stylized depictions of sex. The film also inspired Kunihiko Ikuhara to work in anime, and its visual and thematic influences can be seen in Revolutionary Girl Utena.

Released in 2016 with theatrical and home video re-release in North America,

the official and Red Band trailers can be found here

It has also been broadcast, uncensored, late nights on Turner Classic Movies.

Belladonna of Sadness'' provides examples of: