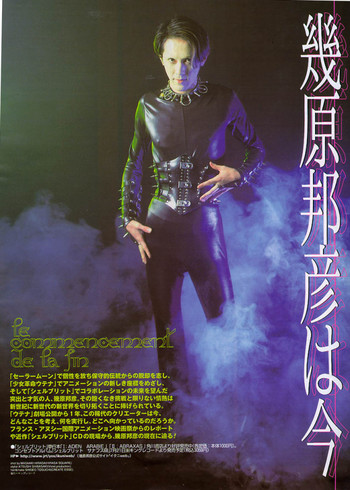 Just Ikuni being Ikuni.
This is just between you and me, but when I was fourteen, I saw a UFO.
That UFO telepathically told me this prophecy: "When you grow up, you will direct an anime about girls revolutionizing various things."
Surely you jest.
"You must not tell anyone about me. If you ever do..."
Wh-What will happen to me?
"People will call you a sketchy guy."
Advertisement:

Kunihiko Ikuhara (born December 21, 1964) is a Japanese animator and director. He is basically the Japanese David Lynch, most famous for directing the TV series Revolutionary Girl Utena and its movie The Adolescence of Utena, plus the first four seasons of Sailor Moon (directed several episodes in the first season, and became the series director for the R note  Junichi Sato directed the Makaiju arc. but left the show afterwards , S, and SuperS seasons) as well as the R movie, and the Mamoru Oshii of TV anime. Also notoriously evasive about giving straight answers to his more surreal works. Belladonna of Sadness has been cited as an influence of his, which is quite easily seen in Utena.

Another of his works, Penguindrum, aired from July to December 2011 as part of that year's summer anime lineup. His latest project, Sarazanmai, is airing as a part of the Spring 2019 anime season.

Ikuhara is a firm believer of the "Girl-on-Girl Is Hot" adage: a lot of his work features lesbian characters that are not only well emotionally developed, but are also a nice piece of Fanservice, especially when things get steamy.