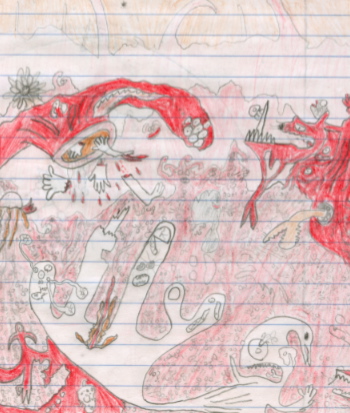 Pain is the curse of consciousness.

In 2008, a Something Awful forums goon scanned and uploaded a 94-page graphic novel he drew back in sixth grade. Drawn in a composition book with only a pencil and many, many red crayons, it was an astonishingly deep (and gruesome) space opera about a scientific experiment gone horribly wrong, and the conflicts that followed between the survivors on the Moon: the Scientific community and New Jerusalem, and the ultimate struggle to destroy the Eldritch Abomination that engulfed Earth.

Bio Apocalypse immediately gained a small cult following, complete with fan art and demands that it be professionally published or made into a movie. In 2011, the first third of what appears to be a narrated animated version

was uploaded to its IMDB page. The original comic can be found here.

A physical copy of the book can be obtained here.

In 2012, the entire animated version

was posted to YouTube. It is awesome. So is this fan trailer.

A modern spin-off is currently in the works.

Tropes seen in Bio Apocalypse include: