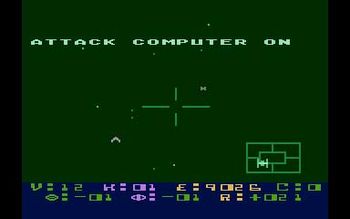 (also the designer of the system's POKEY sound chip) and released by Atari in 1979. Intended as an action version of the Star Trek Text Game, it is most notable for being one of the earliest examples of the "space combat simulation" genre, and is a clear ancestor to later titles like Wing Commander and X-Wing. Stanford University selected it in 2007 as one of the 10 Most Important Video Games Of All Time.

The game tasks the player with finding and destroying an invading enemy fleet of Zylons, while simultaneously defending his own starbases from them. The player wins by destroying all enemies; the game is lost if either the player's ship or all of his starbases are destroyed. After consulting a Galactic Map to see where the Zylons are, the player must then warp to the sector, then find and engage them in a first-person view. The player can repair ship damage by docking with a starbase.

At the end of the game, the player receives a rank and class based on the difficulty level, time taken, and number of starbases lost; only the most proficient players would earn the coveted rank of "Star Commander - Class 1".