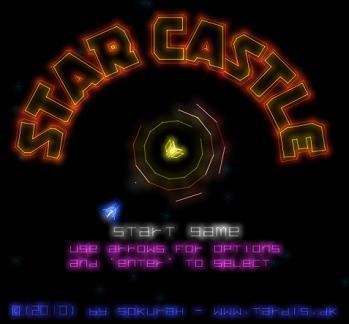 Star Castle is a Vector Game from The Golden Age of Video Games. Released in 1980 by Cinematronics, and bearing a passing resemblance to Asteroids, the aim of Star Castle is to destroy a large, stationary space cannon using your small, agile fighter craft.

Making this difficult is three things:

This last thing is Star Castle's defining feature. Each forcefield ring is composed of twelve sections, which can be destroyed individually by the player's guns. The rings spin in alternating directions, so any holes blasted in the ring won't stay in the same place - this requires the player to destroy large sections of the ring in order to expose the enemy cannon long enough to get a shot in.

Adding to the challenge is the fact that the shield rings can regenerate - although they'll only do so if you completely destroy one. Because of this, you have to be careful to destroy the shields just enough to allow you to get a shot at the cannon, but not enough so that they fully regenerate.

One single hit on the cannon is enough to destroy it, and then it's onto the next level, where you face exactly the same thing again, but faster.

This game has been released for the Vectrex. An Atari 2600 version was attempted by Atari, but instead it became Yars' Revenge. A homebrew version for the Atari 2600 was released years later, as was a ColecoVision version called Star Fortress.