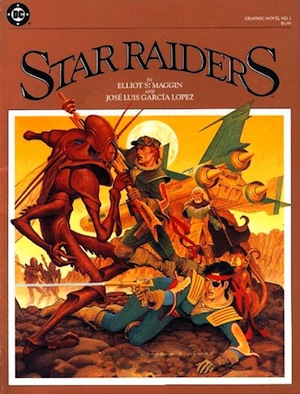 A graphic novel loosely based on the Atari game Star Raiders, published in 1983 by DC Comics. Written by Elliot S! Maggin and painted by Jose Luis Garcia Lopez, it was the first title in the DC Graphic Novel series. The story follows Jedediah Poole and Tomorrow "Tommy" Hardtack, two human adventurers who find a desolate planet with the Star Raider, a small, nimble, and very powerful spaceship. Aided by Zeke Vicker, the planet's only survivor, Poole and Hardtack decide to start a rebellion against the tyrannical Zylons who have conquered the galaxy.
Advertisement:

According to Comic Book Resources

, the story was originally intended as a 120-page-long limited series. Unfortunately, due to The Great Video Game Crash of 1983, Atari canceled the deal with DC Comics midway through development. With 40 pages already completed, DC decided to cut its losses by commissioning an additional 20 pages to finish the story, then released it as a single volume.

The graphic novel provides examples of the following tropes: