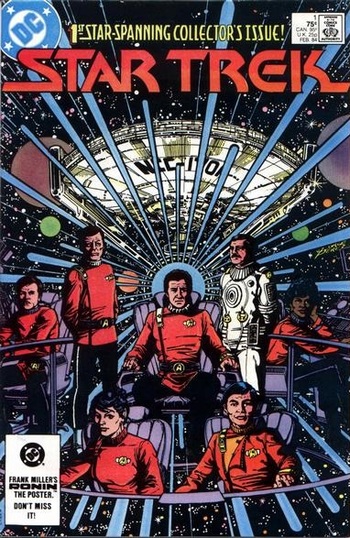 A part of the Star Trek Expanded Universe, Star Trek was an ongoing monthly comic series published by DC Comics. It ran from 1984 to 1996, encompassing two volumes and a total of 136 issues, along with nine annuals, three specials, four film adaptations, two graphic novels, and a four-issue miniseries. The series attracted talent such as writers Peter David, Len Wein, and Mike Barr, artists Gordon Purcell and James W. fry, and inker Arne Starr.

Volume 1 was released from 1984-1988, primarily covering a period of time after the events of Star Trek II: The Wrath of Khan, though a few issues were set during the time of the original five-year mission, or between Wrath of Khan and Star Trek: The Motion Picture. In addition to the core cast of The Original Series, this first volume introduced several new characters who played significant roles in the series, as well as bringing back fan-favorites Arex and M'Ress from Star Trek: The Animated Series. In addition to the regular run of this volume were adaptations of Star Trek III: The Search for Spock and Star Trek IV: The Voyage Home. Prominent stories included follow-ups to the Mirror Universe, and a stint where the crew commanded USS Excelsior after the events of The Search for Spock.

Volume 2 of the series ran from 1989-1996, immediately preceded by the adaptation of Star Trek V: The Final Frontier and was set in the time between Star Trek V and Star Trek VI: The Undiscovered Country, the latter of which also received an adaptation. It also saw the graphic novels Debt of Honor and Ashes of Eden, along with the four-part The Modala Imperative miniseries. While the editorial staff may have considered the series a continuation of the previous one, Executive Meddling led to all of the first series' original characters, along with Arex and M'Ress, being removed, and the story basically starting over from The Final Frontier. The extent of the meddling by Paramount Studios eventually led to the departure of Peter David, though a change in the Paramount offices after the death of Gene Roddenberry eased up the restrictions a bit.