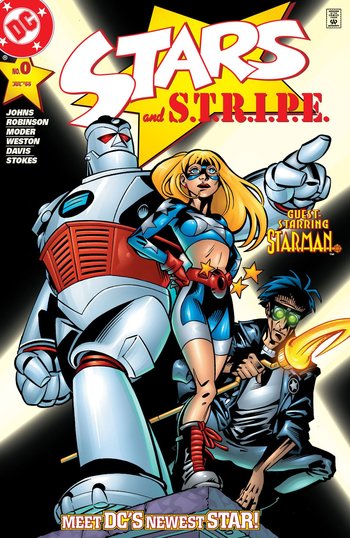 Not caring for her mother's beau, Pat Dugan, Courtney Whitmore went through his boxes when he moved in and discovered the Cosmic Belt. Without knowing of Dugan's past as a costumed hero, she used the belt and a modified costume to become the new Star-Spangled Kid, much to Dugan's annoyance. Consequently, Dugan created the S.T.R.I.P.E. armor to keep his new stepdaughter safe and once again became the adult sidekick to a Kid Hero.

Geoff Johns would later adapt the comic into the 2020 live action series, Stargirl. It is currently airing on The CW.

Stars and S.T.R.I.P.E. provides examples of: