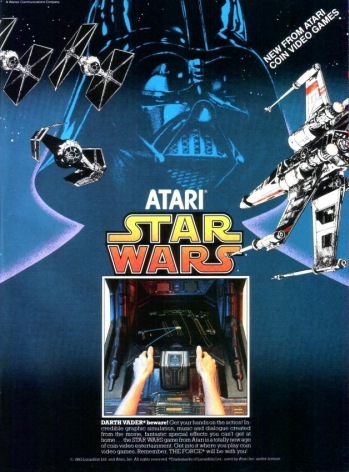 OBI-WAN IS GONE BUT HIS
PRESENCE IS FELT WITHIN THE FORCE.
THE EMPIRE'S DEATH STAR, UNDER THE
COMMAND OF DARTH VADER, NEARS THE
REBEL PLANET. YOU MUST JOIN THE
REBELLION TO STOP THE EMPIRE.
THE FORCE WILL BE WITH YOU.
ALWAYS.
Advertisement:

Star Wars: The Arcade Game (originally just titled Star Wars) is an arcade game developed and released by Atari in 1983. It was also ported to various consoles and home computers in 1984 by Parker Brothers, and in 1987 and 1988 by Domark and Brøderbund.

The game replicates the final battle in Star Wars: A New Hope in that you pilot an X-Wing Fighter to the Death Star in order to fire the torpedo that goes into the reactor core and destroys the battlestation. Opposing your approach are a squadron of TIE Fighters, bunkers and towers on the surface, and laser turrets firing shots at you in the trench run that leads to the exhaust port you need to fire into.

The game is notable in its use of color vector graphics and its digitized speech replicating famous lines from the movie. It was followed in the arcades by Star Wars: Return of the Jedi (which used an isometric diagonal-scrolling perspective similar to Zaxxon) and Star Wars: The Empire Strikes Back (which was a conversion kit for this game).

Not to be confused with either Star Wars Arcade or Star Wars Trilogy Arcade, both by Sega.

This game features examples of