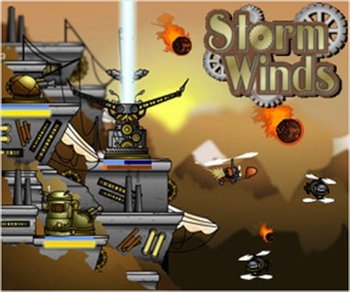 Stormwinds is a series of Adobe Flash Web Games made by Hero Interactive, an Action Game which plays like a hybrid of Shoot 'em Up and Real-Time Strategy.
Advertisement:

The nation of Argoria is under attack by the airfleet of invading nation Demo, and it's up to the player and their defences to stop the Demon invasion. Defending Argoria's forts against an oncoming enemy, you must purchase and place turrets on the structure and keep them in good working order. As enemy waves fly in, the player has to select a turret —only one at a time— and start firing. It's an intriguing combination of game types that's both strategy-oriented and action-packed.

A sort-of sequel The Lost Campaigns, and a point-and-click Adventure Game The Mary Reed Chronicles were also produced as part of the series.

, The Lost Campaigns can be played here

and The Mary Reed Chronicles can be played here