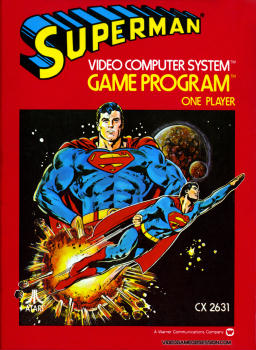 You start out as Clark Kent, in a phone booth. Head east one screen, and Lex Luthor and his five henchmen will blow up a bridge and flee. Head back to the phone booth and change into Superman. You have two missions: Reassemble the bridge, and capture Lex and his men. Metropolis is represented as a 21-screen overworld, with four subway entrances, a jail, the Daily Planet, and the phone booth. You fly around looking for Lex, his men, and three pieces of the bridge. If you spot a villain, pick him up and carry him to jail. If you spot a bridge piece, pick it up and carry it back to the river. Once you have put all six villains in jail, and reassembled the bridge, change back into Clark Kent, and head to the Daily Planet to file your story.

There are "Kryptonite satellites" wandering around the city. If one touches you, you lose the ability to fly and carry villains and bridge pieces. Depending on the right difficulty switch, either Lois Lane will appear to heal you, or you will have to walk around the city until you find her. Touch her to regain your powers. There is also a helicopter flying around, picking up Lois and bridge pieces and scattering them around.

There is no way to die. Your objective is to complete your missions in the least amount of time.