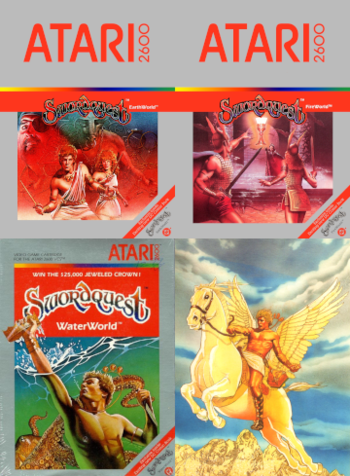 The most expensive video game contest never completed.
"Come questing with bold siblings twain,
Prime thieves of ravaged Earth;
Next journey to the Fireworld,
Land of volcanoes' birth.
Waves without number- Water's realm-
But 'ware of evils there;
Last, ride the Air's winds heaven-high
To claim a prize most rare."
Advertisement:

In 1982, Atari, at the height of its power during The Golden Age of Video Games, decided to do a sequel to Adventure. The ideas they came up with were very ambitious: A four-part Action-Adventure series, built around a series of contests for big-buck real world prizes. They came up with a story about two brave young adventurers, Torr and Tarra, and their quest for the Sword of Ultimate Sorcery. They threw in every ancient and mystic symbol they could think of: The Four Elements, the Western Zodiac, the Kabbalah Tree of Life, the Chakra points, and the I Ching. They commissioned the Franklin Mint to make five prizes, worth a total of $150,000, and hired DC Comics to make a comic book for each game that would set the story, and hold clues for the contests.

The games themselves would hold clues to the contest. You would find clues in the game in the form of a two number code, referring to a page and panel of the comic. In that panel, you would find a word hidden in the artwork. After you found all the words, you would try to figure out what the sentence was. Then you would send what you thought was the right sentence to Atari, and if you got it right, you would be entered into one of the contests. In each contest, you would play a special version of the game, and the one who found the most clues in a limited time would receive one of the prizes: A $25,000 Talisman of Penultimate Truth, a $25,000 Chalice of Light, a $25,000 Crown of Life, and a $25,000 Philosopher's Stone. The winners of these contests would then compete with each other for the grand prize, the $50,000 Sword of Ultimate Sorcery.

OK, but what about gameplay?

Due to The Great Video Game Crash of 1983, only competitions for Earthworld and Fireworld were ever held, and the Talisman and Chalice awarded. It was heavily rumored and/or joked that the Crown, Stone, and Sword were in the possession of Jack Tramiel, who bought Atari in 1984, but in 2015 a Facebook conversation

confirmed that they were returned to the Franklin Mint and melted down. Only the Chalice still exists in full; most of the Talisman was melted down by the winner. A later investigation

revealed that there had in fact been a quiet, semi-secret contest among the 10 the winners of Waterworld, as the game had been released under the stipulation that the contest would go ahead and thus it legally had to be held. Who the 10 gamers that took part in the contest were, and which one ended up winning the Crown, is unknown.

The Angry Video Game Nerd did a rather respectful review (contrary to his usual style) of the series, which can be seen here.

Details about the Comic Book series can be found here.