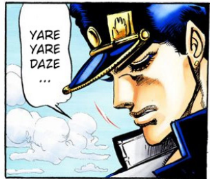 A great way to add depth and character to an alien race, especially antagonists, is to give them their own language, and have them use it often. Frequently, one phrase will be repeated over and over again by characters speaking this language, but for some reason, won't be translated for the viewer, leaving you to wonder exactly what this alien phrase means, and why they say it so often.

If a work goes on for long enough, expect that the meaning of the phrase will eventually be explained. This may be done to add yet more depth to aliens and their language, to get the fans to stop pestering everyone involved in the production with questions about what it means, or for the sake of a good joke (or a bad joke).

Inverse of You Are the Translated Foreign Word. Compare Reality Has No Subtitles, where foreign languages remain untranslated, usually because the point-of-view characters don't speak them. Compare Pardon My Klingon, when words or phrases aren't translated due to vulgarity.