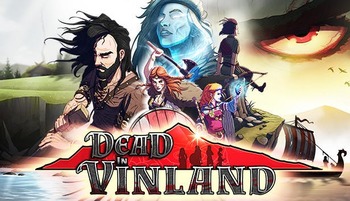 From left to right: Eirik, Blodeuwedd, Freyja, Moira, Kari, Björn.
"We came to this island broken and empty-handed but at least we had each other. We did all we could to build a new home. Every bit... exhausting. And then we did more."
Advertisement:

One night, Eirik and his family are attacked by an angry mob. They are forced to flee, but their ship is destroyed in a storm and they end up castaway on a strange island. Though frazzled, they are all alive and set up camp. When all looks like it might be okay after all, they are visited by the tyrant Björn Headcleaver and his goons. He tells them that he'll only allow them to share the island with them if they provide resources for him, and then beats them up some for good measure. Now the family not only has to survive the island, they also have to produce enough resources for Björn to keep them alive...

Dead In Vinland is a strategy/resource-management game set in the Viking age. There are also adventure parts where you explore the island and occassionally run into turn-based combat with Björn's goons. The characters all have a set of skills that can be upgraded and improved upon, and determines whether they manage the skill checks strewn across the map.

The game can be found on Steam