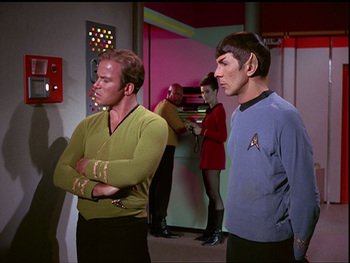 Please note Sisko and Dax in the background Internally squeeing.
Two agents from Temporal Investigations, Luscly and Dulmer, arrive on the station to interrogate Sisko on his recent excursion in time. Sisko explains that it all began two weeks ago, when he traveled on the Defiant to Cardassia to fetch the Orb of Time, which the Cardassians are returning to Bajor. We flash back to the ship taking on the orb as well as a human passenger, Barry Waddle, who was stranded on the planet during the Klingon attack. Everything is going fine until a sudden surge in chroniton radiation envelopes the ship. It drops out of warp, decloaks, and transports someone away. When the viewscreen comes on, they recognize the original Constitution-class Enterprise orbiting a space station.
Advertisement:

They are 105 years in the past, and they've identified that their passenger, Waddle, is actually a Klingon spy named Arne Darvin whose life went south after he failed a mission during the events of "The Trouble With Tribbles." Darvin has used the Orb of Time to get a second chance at his mission by assassinating James T. Kirk before he can expose Darvin's younger self. The crew have to stop him, so they get dressed in the suspiciously 1960s fashion of the 23rd Century and covertly beam over to find Darvin.

O'Brien and Bashir bumble their way through the old-fashioned technology of the original Enterprise while Odo lounges in the bar, where he discovers that Darvin has been through recently and tried to order a raktajino. While awaiting Darvin's return, Odo watches Uhura receive a tribble from Cyrano Jones. Worf arrives and discovers that Odo has taken a tribble as a pet. Worf bristles and describes the thing as an ecological menace that the Klingons ended by exterminating them long ago. Meanwhile, a Klingon D7 battle cruiser drops out of warp, and Dax identifies it as her old friend Koloth's ship. Dax recalls that Koloth once traded insults with Kirk but never faced him in battle, so he's just here for shore leave.

Bashir and O'Brien bump into the attractive Lt. Watley for a second time, and she propositions Bashir. The doctor realizes that she might be his great-grandmother, and he wonders whether he has to become his own great-grandfather or cease to exist, but he lets it pass. While Dax and Sisko gawk at Kirk and Spock, Bashir and O'Brien join Odo and Worf in the bar to spy on Scotty, Chekov, and Freeman. They also notice a group of Klingons who look nothing like 24th Century Klingons, and Worf doesn't want to discuss it. The Klingons pick a fight with the famous Enterprise crew, and our own characters get wrapped up in the fray. Afterwards, Kirk chews everyone out, and O'Brien is one of those singled out.

During the fracas, Worf has managed to capture the older Darvin, who admits that the method of Kirk's impending assassination will have a certain poetic justice to it. Indeed, with Odo's help, they figure out that Darvin has put a bomb in a tribble as revenge for Kirk using a tribble to expose him. The bomb will blow in an hour, so they'd better start scanning tribbles, whose population has of course exploded by this point. On the bridge, Dax recognizes Dr. McCoy and implies that a previous host once had a dalliance with him.

On the station, the team is frantically scanning tribbles in the grain storage area, where Dax has detected the bomb-laden tribble is located. All these tribbles have died due to Darvin's poisoned grain. Kirk and Spock open the compartment and are in the middle of uncovering Darvin's plot when the bombed tribble is located. Our heroes beam it outside, where it explodes harmlessly, saving the day.

Sisko ends his story by stating that history progressed just as it was supposed to, with Kirk using a tribble to expose the younger Darvin as a Klingon spy. However, Sisko does admit that he fulfilled his fantasy of telling Kirk that it was an honor to serve with him. Kirk asked his name, smiled, and told him to carry on. Sisko states that he'll accept a reprimand for his actions but doesn't regret them. Surprisingly, Dulmer brushes it aside and assures Sisko that his report will be fine. However, the investigators never asked about the tribbles. It turns out that Odo brought his tribble back to the present, and now the station is infested with tribbles.

In "Trials and Tribble-ations" from "Star Trek: Deep Space Nine," Dax details the explosive breeding rate that can happen from just a single tribble in just three days. Then, she and Sisko share a bemused look later on when they are seeking a bomb hidden amidst these tribbles and they hear Spock giving the exact same statistic.

In "Trials and Tribble-ations" from "Star Trek: Deep Space Nine," Dax details the explosive breeding rate that can happen from just a single tribble in just three days. Then, she and Sisko share a bemused look later on when they are seeking a bomb hidden amidst these tribbles and they hear Spock giving the exact same statistic.