Literature / The Other Boleyn Girl 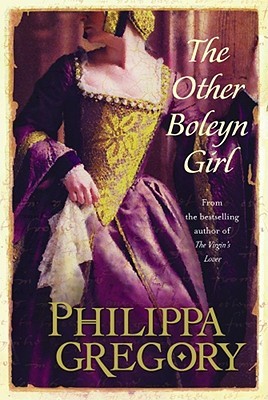 The Other Boleyn Girl is a Historical Fiction novel written by British author Philippa Gregory, very loosely based on the life of 16th-century aristocrat Mary Boleyn. Reviews were mixed; some reviewers said it was a brilliantly claustrophobic look at palace life in Tudor England, while others have consistently pointed out the lack of historical accuracy.note In Philippa Gregory's defence, when she was writing the book in 2000, Eric Ives' biography that revealed Anne was the younger sibling had not been released, so the birth order of Anne and Mary was unknown, hence the "change" in birth order of Anne and Mary. Even so, it has enjoyed phenomenal success and popularity since its publication in 2002, and launched a new wave of Tudor-centric historical romances.
Advertisement:

The Other Boleyn Girl speaks of the little-known sister to Anne Boleyn. Inspired by the life of Mary Boleyn, Gregory depicts the annulment of one of the most significant royal marriages in English history (that of King Henry VIII and Catherine of Aragon) and the great need of a male heir to the throne, though most of the actual history is highly distorted.

Has a sequel, The Boleyn Inheritance.

The book was adapted into two movies: One released in 2003, starring Natascha McElhone as Mary, Jodhi May as Anne and Jared Harris as Henry VII and the other in 2008, starring Scarlett Johansson, Natalie Portman, and Eric Bana.