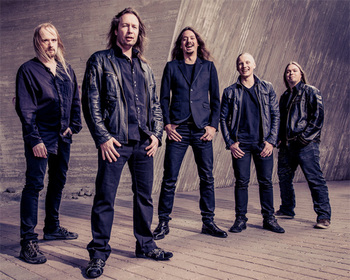 In 1985, guitarist Stråhlman left and was replaced by Timo Tolkki, who also took up vocal duties from Lassila. The band was renamed to its current moniker at Tolkki's suggestion—it's a combination of "Stratocaster" and "Stradivarius", a reference to Tolkki's neo-classical metal sensibilities. They recorded a demo, sent to various companies until CBS Finland picked them up in 1987.

Their first album, Fright Night, was released in 1989. Their second album was released three years later, but the band was dropped by CBS Finland. Jari Kainulainen became the new bassist in 1994, halfway through recording of their third album Dreamspace. Around this time, Tolkki's voice began to fail, and auditions for a new vocalist landed Lappajärvi native Timo Kotipelto. Fourth Dimension was recorded with him and released in 1995, to much success.

Following this, Tolkki massively overhauled the band's sound, getting rid of Lassila and keyboardist Antti Ikonen. In their place came, respectively, Jörg Michael from Germany and Jens Johansson from Sweden. This new lineup put out Episode in 1996, a major breakthrough for the band with a full string orchestra and choir in some songs, with such classics as "Father Time", "Will the Sun Rise?" and "Speed of Light".

They released three more albums over the next four years: Visions, Destiny and Infinite. They also toured extensively in this time, and recorded their first live album Visions of Europe in Greece.

After this, the band took a brief hiatus before the big project in their plans. To sate fans's wishes for new material, four new tracks were recorded for the compilation Intermission, which also had B-sides and bonus tracks from the previous albums. When they returned in 2003, Elements did not disappoint—with a peak in their new style of symphonic metal, it was the most epic thing Stratovarius had ever done, to the point it was split into two albums.

Unfortunately, after touring for Elements, Tolkki had a grueling Creator Breakdown that came with some absurd publicity stunts (like inexplicably replacing Kotipelto and Jörg and "converting" to Kabbalah); he was diagnosed with chronic depression and confined to a mental hospital.

Band issues were resolved by January 2005, with Kotipelto and Jörg back in the fray. By June, Jari Kainulainen amicably left the band, burned out from the constant touring at the time, and passed his spot on to Lauri Porra. With him, they recorded a self-titled album that spawned the single "Maniac Dance" and did a world tour in 2005 and 2006, where they visited the USA and Canada for the first time.

In 2008, after a long period of silence from the band, Timo Tolkki announced Stratovarius's breakup on the official website, citing too much internal tension. However, the rest of the band wasn't willing to throw in the towel just yet, and so Tolkki signed over the rights to the name and left for good. He'd written about 95% of the band's repertoire before this, so his leaving would mark a major change in the band's style.

The next year (2009) saw the release of Polaris, recorded with new guitarist Matias Kupiainen, and its single "Deep Unknown", followed two years later by Elysium and the "Darkest Hours" single. During this time, Jörg Michael discovered a malignant tumor and had to be temporarily replaced while he got treatment; he recovered, but ultimately retired from drumming after a farewell mini-tour.

Stratovarius are mainly known for their symphonic and classical tendencies (hence the genre of the band), often using choirs or orchestras as well as traditional metal instruments. They are also well-known for Timo Kotipelto's distinctive high-pitched singing voice.