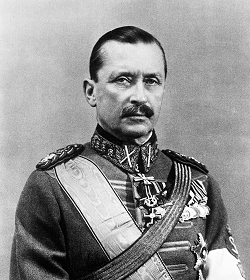 He was born in the autonomous Grand Principality of Finland (when Finland was a dependency of Tsarist Russia) to an old family of Swedish ancestry. Entering Military School he narrowly avoided having his career ended by an adolescent prank but his family saved him and he entered the service of the Czar. He served in the Russo-Japanese War and in World War I as well as going on an espionage mission, uh, "scientific expedition" in the wilder parts of Central Asia, where he engaged in many exploits, including personally meeting the Dalai Lama. During World War I he was a general in the Czarist army, ironically on the opposite side from several who would later be his most trusted officers. After the Bolshevik Revolution he took a train back to Finland which was taking it's chance to declare independence. This brought about the short Finnish Civil War between the Red Finns and the White Finns (Bolsheviks and anti-Bolsheviks just as in Russia). Mannerheim was given command of the White army and was able to bring about a quick White victory. Unfortunately this achievement was clouded by atrocities against Red prisoners (a more common occurrence in civil wars where each side often theoretically considers the other as criminals rather then being My Country, Right or Wrong), an incident for which Mannerheim was blamed by many. Between the wars Mannerheim devoted himself to philanthropy. He was personally conservative, in fact a monarchist, but took little part in internal factionalism, except to advocate greater preparedness for the coming war. When Germany invaded Poland beginning World War II, the Soviet Union took the opportunity to pick up the tidbits in Eastern Europe. Unfortunately one of those tidbits happened to be Finland. Unfortunately for the Soviet Union that is.

During the Winter War (WWII Finland vs Russia), Continuation War (WWII Finland+Germany vs Russia), and Lapland war (WWII Finland vs Germany) he took command of Finnish forces. He was an unspectacular but sound commander depending on the arctic bred hardihood of his men and the difficult terrain of Finland to make up for Finland's lack of equipment. He also showed considerable political savvy, an example of which was his decision during the Continuation War to halt Finnish advance at the borders of territory lost in the Winter War, steadfastedly refusing to help Army Group North attempt to take Leningrad in October 1941 - leading to their decision to abort the operation, thereby preserving Army Group North and prolonging the war. His continued refusal to help them with attempts to take Leningrad in Summer 1942 and thereafter helped keep Nazi Germany at arm's-length and allowed Finland to make a separate peace without overly harsh conditions after the annihilation of a third of Germany's entire force of combat troops in 1944 (Operation Bagration). Toward the end of the war and after he was elected president and helped guide Finland through the recovery. He retired to Switzerland and died in 1951.