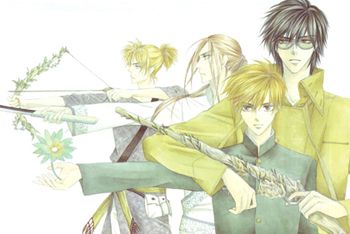 A tale of an alternate world, magical plants and stones, and group hugs.

Written by Sugiura Shiho, this Shoujo manga stars a 17-year-old boy named Rakan, who enjoys "cooking, cleaning, and studying", and caring for his little jungle in the backyard. He's lived alone ever since his mother and grandfather passed away a year ago.

As he comes home from school one day, a strange man appears in his backyard, just as he and his mother did 15 years ago. When Rakan and the man, Chigusa, witness Chigusa's wooden gun grow into a full-grown tree after Rakan touches it, Chigusa sticks himself to the boy like a leech, insisting on protecting him because he's a Sanome, which is a person that can grow plants just by touching them and is extremely rare in his world, where just about everything is desert.

As the story continues, the two find themselves bound together, as if by Fate, as they gain friends, turn the desert world green again, and, most importantly, learn to understand each other.

The manga was serialized in Ichiraci from 2003 to 2012, and compiled into 27 volumes. It was formerly licensed in English by Tokyopop, who released the first nine volumes into English, but they lost the rights to the series after they closed in 2009.