Video Game / The Simpsons: Bart vs. the Juggernauts 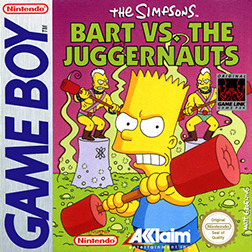 Kent Brockman: Live from the Springfield Arena, welcome to another edition of The Juggernauts, the show that invites you to win big prizes by taking on a series of hulking brutes and takes no responsibility for any injuries you might sustain!
Advertisement:

The Simpsons: Bart Vs The Juggernauts is a 1992 Game Boy game released by Acclaim alongside their other Simpson games of the era. Parodying the popular American Gladiators series, the game is centered around a show called Juggernauts USA making a visit to Springfield and one lucky citizen will get the chance to take on the Juggernauts for the chance to either win big, or go home in a body cast. Somehow, this lucky contestant ends up being 10-year old Bart Simpson...

The game is divided up over the course of several weeks of events, where the goal is to win a certain amount of money to pass to the next round. The events are:

Bart vs. the Juggernauts provides examples of: