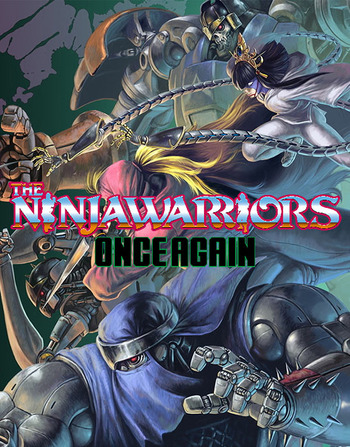 The Ninja Warriors (also known as The Ninja Warriors Again in Japan, The Ninja Warriors: New Generation in Europe) is a side-scrolling Beat 'em Up developed by Natsume and released by Taito for the Super Nintendo Entertainment System in 1994. It is loosely based on the 1987 Taito arcade game The Ninja Warriors, being more of a remake of the original than a port. Again is single plane beat-'em-up much like its predecessor, but it has a bigger emphasis on Final Fight-style combos and input-based special moves, as well as multiple playable characters.

In a dystopian future where the population of an unspecified country has been oppressed by the military and Brainwashed. The leader of this nation is known as Banglar the Tyrant. The only hope for this broken society is a small underground resistance with plans of assassinating Banglar using three androids. Development of the androids was a lengthy process and due to Banglar's forces beating them back literally to their very doorstep, The resistance had no choice but to dispatch the androids untested.

The player can pick from the strong Ninja, the balanced Kunoichi or the fast Kamaitachi. Each character has a combination of throws, ground attacks and jumping attacks. Each also has a gauge that fills up over time. Once the gauge is full, a portion of it can be used to add a stronger attack to the end of a character's ground combo or the entire gauge can be used to deal damage to every enemy on screen. If you get knocked down while the gauge is filling up, the entire gauge will be depleted.

The game features nine stages, with distinct bosses, a variety of mooks who can go off the edges of the screen even though you can't, and really cool music.

Announced in 2018, a remake in a similar vein to that of Wild Guns: Reloaded, that being The Ninja Saviors: Return of the Warriors (The Ninja Warriors: Once Again in JP). The remake features two new [unlockable] characters (Raiden and Yaksha), co-op multiplayer, and a graphical upgrade. The remake will be released on the Nintendo Switch and PlayStation 4 on July 25, 2019 in JP/Asia regions, August 30th in EU/PAL regions and October 15th in the US.

Alternative Title(s): The Ninja Saviors Return Of The Warriors, The Ninja Warriors Once Again