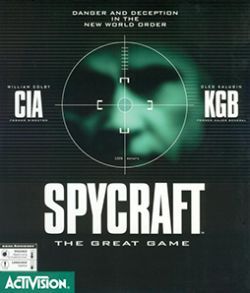 CIA Credo: And ye shall know the truth, and the truth will set you free.
Opening Voiceover: Kipling called it 'The Great Game'. You want to win, remember one thing: everything you know could be a lie.
Advertisement:

Note: This article is not about the Tabletop Game Spycraft.

As CIA agent Thorn, your work for the Secret Service will see you preventing assassinations and rooting out traitors, but this spy doesn't storm fortresses and sip martinis. Your work involves sifting evidence, joining the threads and getting the job done with surveillance intel, analysis and quick wits, not force of arms.

Spycraft: The Great Game is an adventure game produced by Activision in 1996, with the coordination of former CIA director William Colby and former KGB Major-General Oleg Kalugin. While the CIA itself does not endorse the game, the contribution of these men leads to a much more realistic portrayal of life in security services, where a piece of security footage rather than forceful intervention is the main task of the intelligence services.

While there are a few limited action scenes to break up the flow, the player spends most of his time analysing information using various software tools available to Thorn, such as matching faces and decrypting coded messages. Navigation of areas and tools is carried out in a format similar to the Ace Attorney games.