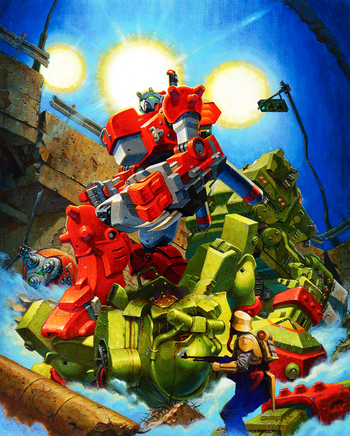 Oh hey, it's the Blodia. Does that mean this is where Jin debuted? Wait, what do you mean "wrong game"?
Advertisement:

Armored Warriors (Powered Gear: Strategic Variant Armor Equipment in Japan) is a Beat 'em Up developed by Capcom and released in 1994.

In 2281, the Earth has been battling aliens from the planet of Raia and has only recently agreed to a ceasefire. One year has passed and the the Raian captial "Melkide" has been seized by a unknown army. The Earth decides to help them out by sending in the Red Shield Unit to save Raia, but unknown to everyone involved, the true purpose of this war was to take over the planet Raia once the army was gone.

The pilots in the Red Shield Unit are the following:

What this Beat 'em Up has going for it is the ability to pick up different parts of destroyed mechas, such as their arms, legs, and onboard weapons, although enemies can make you lose yours as well. If two or more people are playing, and you pick up a radio in the level, you can get a joint machine where you and your allies can become a Combining Mecha for a limited time during boss battles.

The game got a Spiritual Successor in the form of a Fighting Game called Cyberbots in 1995.