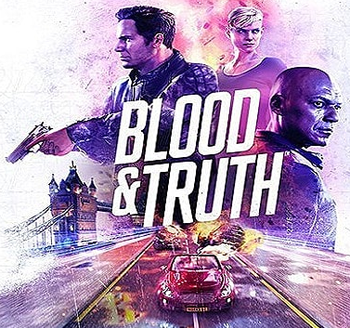 Blood & Truth is a Rail Shooter, released on May 28th, 2019 exclusively for Playstation 4 VR. It is an expanded version of The London Heist part of the PlayStation VR Worlds, and was originally developed by Sony Interactive Entertainment as a new instalment in The Getaway series, before getting reconfigured as its own thing.

You play as Ryan Marks, a scion of a powerful London crime family who served in the Special Forces but found it only honed his bloodlust. The story begins with his interrogation by a CIA operative, and then flashes back to the day of his father's funeral, which was when the remaining family was ambushed by a rival gang. This sets Ryan off on a path of bloody vengeance against their upstart leader, Tony Sharp, and his underlings, which stretches through the game's 19 chapters.