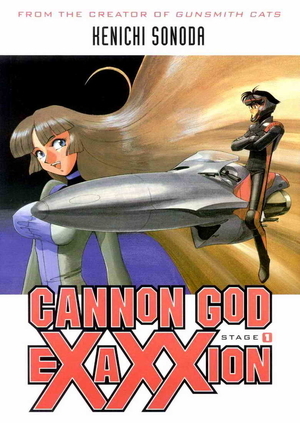 An Ordinary Highschool Student is given a Humongous Mecha by his Mad Scientist grandfather to battle an Alien Invasion.

Kenichi Sonoda (of Gunsmith Cats infamy, also principal character designer for Bubblegum Crisis) rejuvenates the Super Robot formula by injecting it with a psychedelic combination of a starkly realistic world along his own special brand of over-the-top humor, characters and of course, Fanservice. The manga ran in the seinen magazine Afternoon from 1997 to 2004.

Set in an indeterminate near-future time, ten years after Humanity was first visited by an alien race known as the Riofaldians, said aliens now live and work among humans all around the globe and their technology has advanced Earth society by leaps and bounds. But when the Riofaldian government decides to take a more... direct role in Human affairs, the Earth's defenses are quickly overwhelmed.

Enter Hoichi Kano, a tough, wisecracking highschool kid who resents the fact that the other kids are so enamoured with the new toys the aliens have brought, as his grandfather had written an infamous conspiracy pamphlet predicting the Riofaldians would eventually make a play for world conquest. On the day the invasion begins in earnest a new transfer student, the beautiful (and VERY well-endowed) Isaka Minigata, arrives at Hoichi's school with a message from his grandfather, Hosuke Kano.

It's not long before Hoichi is thrust into action, donning a special powersuit with incredibly powerful guns, battling diabolical alien robots and saving the day. But as the alien attacks escalate in response to Hoichi's antics, he'll need the enigmatic giant cannon robot known as Exaxxion to liberate the Earth from the Riofaldians' tyranny...

...If he can keep from levelling the place himself, that is.

Much like Space Runaway Ideon, a major theme of the series is just how difficult the unbridled destructive power of the title mech is to control. Nearly every fight results in horrendous levels of property damage and civilian casualties, not to mention resultant angst from our hero. A fact the invaders are all too happy to point out in their propaganda.

Propaganda is also a major focus of the story, with elaborate smear and counter-smear campaigns waged back and forth by the Riofaldians and Professor Kano for the hearts of the populace. The importance of information control and the need for the public's support in the new media age is heavily stressed.

Equal parts Humongous Mecha, Alien Invasion and Techno Thriller (with a heavy dose of that ol' Sonoda Ecchi-ness), Cannon God Exaxxion is (aside from the typical Mecha Show flights of fancy) one of the most realistic portrayals of alien occupation to date.

Compare Space Runaway Ideon and Neon Genesis Evangelion for similar Deconstructions of Super Robots which tackle somewhat different angles (although Ideon plays some tropes straight that are subverted here). Contrast, perhaps, the Nagahama Romantic Trilogy or Voltron as the best straight examples of what Exaxxion is deconstructing.