Film / Zontar, the Thing from Venus 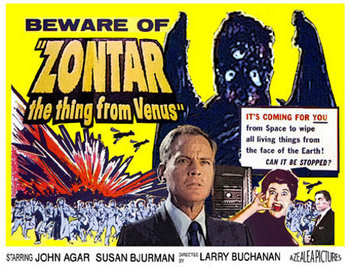 Poster for the film.
Advertisement:

Zontar, the thing from Venus is a 1966 made for TV sci-fi film about an alien, named Zontar, from Venus and its attempt at taking over Earth with the help of a bitter-yet-idealistic human scientist. It was directed by self-proclaimed Schlockmeister Larry Buchanan and based on the teleplay by Hillman Taylor and Buchanan. It is a low-budget 16mm film color remake of a Roger Corman film titled It Conquered the World, which also featured an alien invader from Venus.

At a dinner party with their wives, NASA scientist Dr. Keith Ritchie (Tony Huston) reveals to his colleague Dr. Curt Taylor (John Agar) that he has secretly been in communication with a three-eyed, bat-winged alien from Venus named Zontar who he claims is coming to Earth to solve all of the world's problems. However, as soon as Zontar arrives on Earth via a fallen laser satellite it quickly becomes obvious that the skeletal black creature has a hidden agenda.

The film was commisioned to pad out one of American International's television syndication packages and became one of Buchanan's best known work.

Zontar, the Thing from Venus contains examples of: