Film / The Legend of Boggy Creek 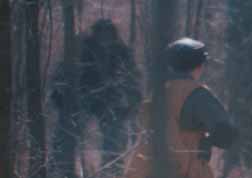 Here, the sulfur river flows,
Rising when the storm cloud blows,
This is where the creature goes,
Save in the land he knows.
Perhaps, he dimly wonders why,
Is there no other such as I?
To love, to touch before I die,
To listen to my lonely cry.
— The song in the end credits.
Advertisement:

The Legend of Boggy Creek is a horror film from the year 1972.

It centers around a cryptid called The Fouke Monster, a sasquatch-like creaturenote probably based on the Skunk Ape

which prowls in the state of Arkansas. It is shot in a documentary style which varies between with interviews of locals and dramatized encounters with the Monster.

The film portrays the sightings of the Monster escalating slowly, starting with random caught glimpses of it in the woods and then ending with an attack against a house shared by two families.

It was followed by two sequels: Return to Boggy Creek in 1977 and Boggy Creek 2: The Legend Continues in 1985.

Examples in this work: