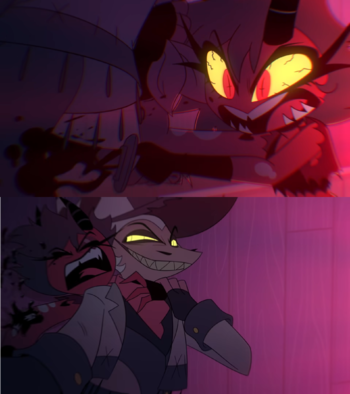 Anger is a weapon only to one's opponent.
"Pissing Punchinello off was a dangerous game, but when people get mad, they make mistakes. I should know. That's where I wanted Punchinello — mad enough to trip over his own feet, preferably into a grave."
— Max Payne
Advertisement:

A subversion of You Wouldn't Like Me When I'm Angry and Unstoppable Rage, this trope is when you want and actively try to make your opponent angry, because they can't fight or perform as well when driven by rage. How it usually works is that as your opponent gets angrier, his attacks will be stronger and more savage. But they also rely less on technique, overall accuracy drops, more mistakes get made, and/or he gets more careless, sloppy, reckless, or tunnel-visioned. This allows you to lead him into traps, get him to hit something he needs to avoid hitting, take advantage of wild swings that leave him wide open, or cause him to waste his ammo or stamina in his fury.

Other advantages to making your opponent angry include keeping his focus on you while your allies sneak up behind him to knife him In the Back or sabotage his plans, or simply make him blurt out something he wouldn't say while he was calm.

A common weakness for The Berserker, where his blind rage proves to be his undoing. May also be caused by a Hate Plague. Characters might also start speaking in Angrish.

A Sister Trope to Revenge Before Reason.

See also Berserk Button, Trash Talk, I Shall Taunt You, and You Fight Like a Cow, which is often meant to provoke this reaction, Villainous Breakdown, when the villains typically lose their composure right before their defeat, Rage Judo, another way to use someone's anger to your advantage, and Moment of Weakness, where getting angry causes a dramatic lapse in judgment. Fury-Fueled Foolishness is similar to this, but without the "intentionally invoked by someone else" angle. In non-physical contexts, this might result in a Misdirected Outburst.

Contrast Tranquil Fury when angering someone makes him more focused and calm instead, and Nobody Calls Me "Chicken"!, for when you want them angry so they can show off better.

People who try to get this reaction out of others include the Warrior Therapist (evil version, specifically), the Batman Gambitter, and the Troll.