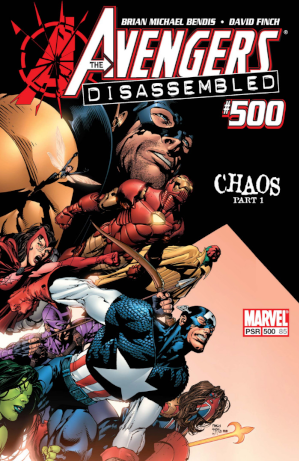 Avengers Disassembled is a 2004 storyline of The Avengers, that details the dissolution of the "classic" team and sets up House of M and New Avengers.
Advertisement:

There came a day, a day unlike any other, when Earth's mightiest heroes found themselves in sudden and unexpected crises, each one worse than the one before. Jack of Hearts, who had been dead, suddenly appears at the door of the mansion looking a little un-dead... and explodes, killing Scott Lang. Tony Stark, while giving a speech at the UN (and completely sober), suddenly becomes intoxicated and begins to insult the Latverian delegate. The Vision returns in a Quinjet, crashes it into the mansion, and releases five Ultrons from his body. She-Hulk loses control during the battle and becomes as savage as the Hulk. The UN breaks relations with the Avengers because of Stark's outburst. All of the heroes who had once been Avengers show up to help... just as the Kree launch an all-out attack. Hawkeye dies during in battle, taking out a Kree ship.

At the climax of it all, Doctor Strange appears in his astral form, and tells them that the Scarlet Witch's chaotic powers are to blame for this — the memory of her lost children has driven her insane and taken all the checks off of her reality-warping powers. He engages Wanda in magical combat and turns the Eye of Agamotto against her, leaving her in a coma. Her father Magneto takes her away to Genosha to take care of her.

Without government support, and without financial support from Stark (who was nearly bankrupt), the Avengers had no other choice but to break up.