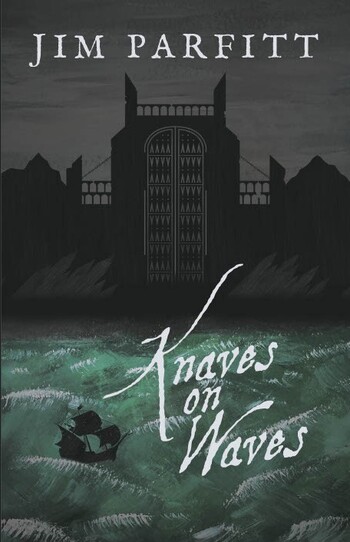 The Tides of Redemption. History’s greatest race. Every year, pirates, thieves and scoundrels gather, coming from all corners of the world in order to claim its vaunted prize. Total amnesty for their countless crimes.Trigger and his crew are no exception, yet to claim victory, they will have to survive a voyage that few would even attempt. Giants, sea monsters, abominations, and wizards. Perilous seas and enemy crews. These alone would be danger enough, yet Trigger has a past that is intent on catching up with him, and swift as his vessel may be, it might not be fast enough.The ultimate journey is about to begin.

Knaves on Waves is an epic fantasy novel, first published in 2021. The debut work of Jim Parfitt, it follows the adventures of Captain Trigger and his crew as they attempt to win the Tides of Redemption, an annual race which promises amnesty for any crimes committed by the victorious pirate crew. As the blurb suggests, merely surviving the journey is perilous enough, with the voyage boasting several good ol’ fashioned Fantasy tropes.

Knaves on Waves contains examples of: