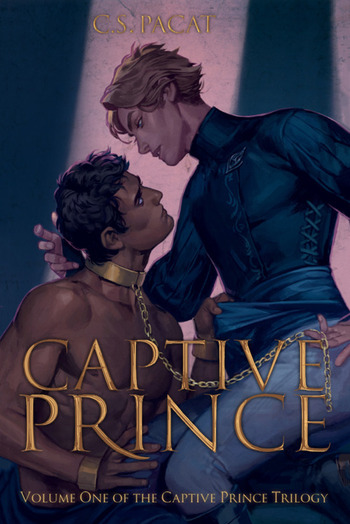 Damen: Is there anyone at this court who isn't my enemy?
Laurent: Not if I can help it.
Advertisement:

Damen is the Warrior Prince of Akielos, beloved by his people. Unfortunately, upon his father's death, he is not granted the throne. Instead, he is presented with a bloody coup staged by his envious half-brother Kastor. Captured and stripped of his identity, Damen tries unsuccessfully to fight, but he cannot escape his imminent fate—a life spent as a pleasure slave for the prince of an enemy nation.

Prince Laurent of Vere is intelligent, beautiful, and dangerously volatile. While serving as a slave, Damen discovers the deadly internal conflict boiling over between Laurent and the Regent of Vere, and falling into the Veretian court's web of poisonous political games begins to seem increasingly inevitable.

Forced to navigate the court in addition to his ruthless, manipulative master, Damen realizes that escaping will not be easy. Especially when he must hide his identity—for he is under the control of the one nation that would hate him more as a prince than a slave.

Written initially as a free online serial on Livejournal by C.S. Pacatnote known previously as Freece or S.U. Pacat, all three books of the Captive Prince trilogy are now officially published.