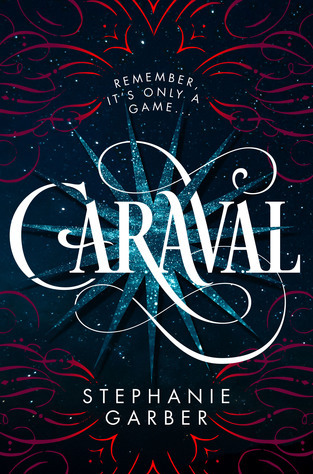 In Stephanie Garber's debut novel, Scarlett Dragna and her younger sister Donatella (called Tella for short) have grown up wealthy and privileged on their father's estate on the island of Trisda. Now Scarlett is engaged to a count as part of an arranged marriage. Although she has never met her betrothed, he appears to be absolutely charming from the letters he has sent her. He is even willing to let Tella move in with him after he marries Scarlett. The Dragna sisters have never left Trisda in their entire lives, and they view this marriage as their chance to finally get away from their controlling father.

There is one thing that worries Scarlett, however. Since she was a little girl, Scarlett would listen to her Nana tell stories about a wondrous event called Caraval. Several years ago, a mysterious man called Legend began the annual tradition of traveling with a team of performers to bring this five-day event to people all over the Meridian Empire. Legend is rumored to have magic powers and his performances are considered to be more stunning than any other circus or carnival.

For the past seven years, Scarlett has been writing letters to Legend, asking if he would bring Caraval to the island of Trisda this year. She never received any responses until a few days ago, when a letter from Legend arrived, inviting her to the Isla de Los Sueños for this year's Caraval. Although Scarlett is glad that Legend has finally answered her, she is afraid that she won't be able to make it, since her wedding is just one week away. She knows her father has been planning this for a long time and is terrified of what will happen if she disappoints him. Tella, however, is determined to go and manages to get herself and Scarlett off of Trisda with the help of a sailor named Julian.

Once Scarlett reaches her destination, she realizes that her sister Tella has been kidnapped as part of this year's Caraval. Players will be required to find clues that will lead them to her so they can win this year's prize. Now Scarlett must find her sister in time to leave Legend's mysterious island and get home in time to marry the count or face her father's wrath.

Followed by Legendary and then Finale came out in 2019 to complete the trilogy.