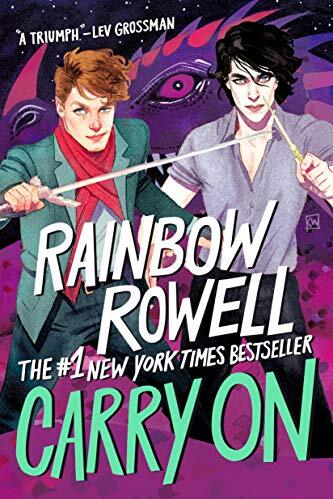 "The entire Internet writes about Baz and Simon. If you go to Google and type in 'Baz and Simon,' the first search it suggests is 'Baz and Simon in love.'"
— Cath, Fangirl
Advertisement:

Carry On is a Young Adult novel by Rainbow Rowell, a companion to her novel Fangirl. It's not Gemma T. Leslie's eighth Simon Snow book, and it's not exactly Cath's Carry On, Simon. It's another "fanfiction" rendition of the eighth Simon Snow book, written in the way that Rainbow Rowell would have penned such a tale.note For more explanation, see here

And as Cath told us, nigh all Simon Snow fanfic is Simon/Baz Slash Fic.

The Simon Snow series is an expy of the Harry Potter series, with a parentless Chosen One wizard who attends a British Wizarding School. But while in framework they parallel, that breaks down the further you go. While the characters might fit their expy counterparts in their initial roles—Simon is Harry, Baz is Draco, Penny is both Ron and Hermione, the Mage is Dumbledore—their personalities are rather different, and by the end their roles have changed substantially.

What makes Carry On interesting is that it is presented as fanfic of a series that doesn't exist—but it still plays off the tropes of that series (and sometimes disparages on them!). For example, multiple characters say how stupid the name "the Insidious Humdrum" is, and Agatha (who's implied to be something of a Satellite Love Interest in the original) rejects her role in the story.

It later spiralled into a series:

Tropes for Carry On:

Tropes for Any Way the Wind Blows