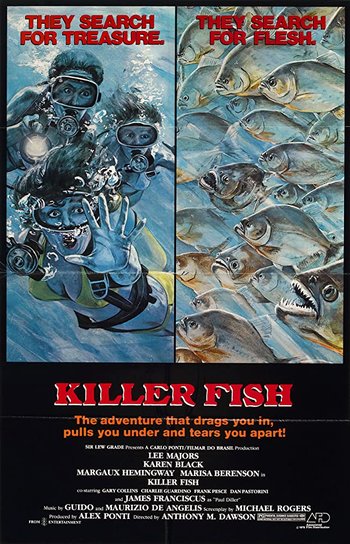 Somewhere in Brazil, retired mine owner Paul Diller (James Franciscus) plots to steal millions of dollars in precious gemstones from his former company. With the jewels stolen, he and his accomplices — Bob Lasky (Lee Majors), Kate Neville (Karen Black), Hans, Warren, and Lloyd — hide them in a lockbox at the bottom of a lake until the heat dies down. Naturally, the thieves try to betray one another for the jewels, only to discover that they're guarded by the eponymous killer fish, a school of piranha put in the dam by Paul Diller to protect against just such a thing.

Meanwhile, a photo shoot is going on elsewhere in the jungle, with model Gabrielle (Margaux Hemingway), director Ann (Marisa Berenson), photographer Ollie, pilot Tom, and boat captain Max. They come into contact with the thieves when a sudden storm bursts the dam, releasing the piranhas into the larger lower lake and putting them all in danger when the boat they're taking shelter in runs aground just offshore.

Directed by Antonio Margheriti and released in 1979, Killer Fish was an Italian Carlo Ponti/Fawcett-Majors co-production, and one of a number of knock-off movies released in the wake of Jaws. It was riffed on an episode of Mystery Science Theater 3000.

Tropes seen in the film Killer Fish include: