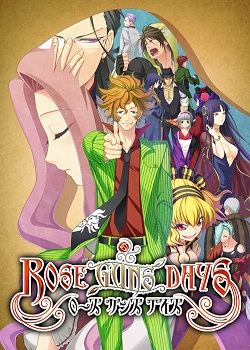 Rose Guns Days is a doujin Visual Novel produced by 07th Expansion. It is unrelated to the franchise 07th Expansion is more known for, When They Cry.

Tokyo, 2012. The city has become a cosmopolitan metropolis, where people of Japanese descent have become very few. The young Journalist Julie Hayashibara is one of them, and is called in by the famous Mafia boss Jeanne Amakawa, Madam of a club in Tokyo called Primavera and Honorary leader of the nationalistic organisation Harukaze. The old woman wants to pass on the story of the unknown first Madam of the club, Rose Haibara, and how Primavera came to be how it is today.

Tokyo, City 23, 1947. In an Alternate History, Japan lost the war in 1944, when the country was destroyed by a natural disaster. The United States and China quickly started to compete in the reconstruction, bringing massive waves of immigrants with them, to the point Japanese people became a minority in Tokyo. Three years later, almost all the Japanese people in Tokyo go by a second Western name, and unemployment mixes with criminality and prostitution. Leo Shishigami comes back in his unrecognizable hometown after three years, and saves a young girl chased by The Mafia, who invites him to eat pasta in the club she owns, the Primavera. After wandering around in the city and unsuccessfully searching for a job and a roof, Leo goes back to the club, where the crime boss, "Crazy" Alfred Akagi, and his henchmen are threatening the girl who helped him. After the incident where he shines again, Leo ends up hired as a bodyguard for "Madam Rose". There begins the story of Rose's determination to help her countrymen in need, where she will have to grow up from an idealistic but naive girl to a confident leader.

The game is completely different from anything released by 07th Expansion so far, as it features no gore, Psychological Horror or mystery, but rather a mix of slice-of-life and action with elements of political drama, and a generally lighter tone. And in a slight originality from the usual sound novel format, action scenes are punctuated by a reflex mini-game with a recorded score at the end of each Season. Instead of a single main story with a single Big Bad, the plot is separated into arcs, or Seasons, with a different Arc Villain for each. Considering the setting, some touchy themes come to be treated in the story, especially the questions of nationalism and defense of one's culture, or Chinese-Japanese relationships after WWII.

the translation team behind 07th Expansion's previous work Umineko: When They Cry, provides a full English translation of the games. The demo can be found here.

The Last Season was released in January 2014.

Other completed manga adaptations include a two-volume spin-off called Aishū no Cross Knife ("The Cross Knife of Sorrow"), published in the Big Gangan, which takes place in 1946 and focuses on Wayne Uedera, with a generally darker tone, and a two-volume prologue titled Fukushū wa ōgon no kaori ("Revenge has the fragrance of gold"), published in Kōdansha's Monthly Shonen Sirius, which takes place before Rose effectively became the Madam. The manga of Season 1 has been licenced by Yen Press.

Obviously not to be confused with Guns N' Roses.