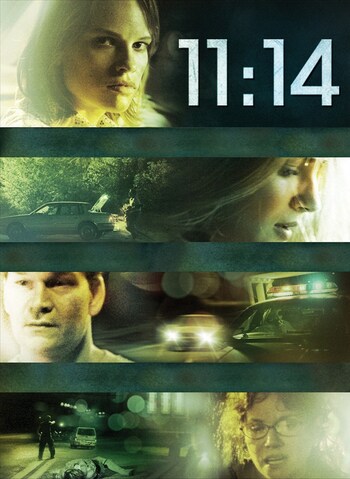 Five lives. One moment. No coincidence.
"Jesus, you're having a rough night."
— The police dispatcher to Officer Hannagan
Advertisement:

A 2003 movie written and directed by Greg Marcks, 11:14 consists of five interlocking stories that take place late one night in a town called Middletown. Each story lasts about twenty minutes and begins about five minutes before the one that came before it, so that the movie ends more or less where it begins. Each story also casts a little light on the events of the earlier stories.

That's about all that can be said about this movie without spoiling it.

Example of:
These Gloves Are Made for Killin'