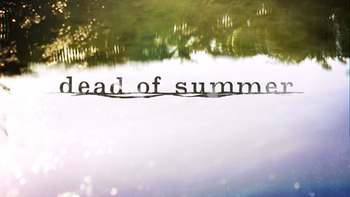 "This place is not just a place. It is alive. Living, breathing. It pulls you in, but holds much too tight. Red runs through it, the red of the night. Hear a whisper, hear a scream. At its center, a pulse. A beat. And you'll never leave."

Dead of Summer is a horror TV series airing on Freeform in the summer of 2016, created by Adam Horowitz, Edward Kitsis, and Ian Goldberg of Once Upon a Time and Lost fame.

Set at Camp Stillwater, a summer camp in Wisconsin in 1989, the show follows a group of camp counselors who come to realize that the camp they work at is haunted, by both literal spirits and by a dark history stretching back decades. As they struggle to survive, the counselors' own secrets start spilling out.

No relation to the webcomic of the same name.