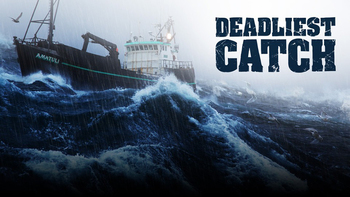 Deadliest Catch is a long-running (18 seasons and counting) Docu Soap Reality TV show on The Discovery Channel that follows crews of fishermen during their two seasons on the rough Bering Sea seeking a valuable commodity — the enormous red king crab around October, and the opilio or snow crab around January. It is repeatedly stated that this is the "deadliest job in the world", and tragedy does occur, such as the sinking of other ships, as well as serious injuries and near-fatal accidents on the featured boats. The opilio season is particularly dangerous due to weather concerns. The show debuted in April 2005 and is still ongoing, with season 18 premiering on April 19, 2022. Starting with season 17, new episodes air first on the Discovery+ streaming service before airing on Discovery Channel a week later (though the Season 18 premiere was simulcast on both platforms).

One prominent boat is the Cornelia Marie, formerly captained by Phil Harris. Among its crew were his sons, Jake and Josh, and current Wizard deckhand Freddy Maugatai. Phil suffered a stroke and died during the sixth season (2010 opilio season). His sons tried to work toward buying their dad's boat in the seventh season, but friction with new captains thwarted that. They went to different boats in the eighth season—Josh to the Time Bandit, and Jake to the Northwestern (where he spent a few weeks on a crew exchange in the sixth season, 2009 King Crab). Jake also has serious recurring drug issues; in the ninth season, at least during the King Crab season, he left the crab grounds to "deal with his demons". Josh has since bought the Cornelia outright and the boat returned to the Opie grounds for the 2014 season, with longtime Harris family friend Casey McManus recruited as captain until Josh gets some experience. For the 2021–22 season, when Alaska shut down the red king crab fishery, the Cornelia secured the bid to fish for golden king crabs, and Josh's long-estranged older brother Shane joined the crew for that season.

Two boats also featured in previous seasons include the Kodiak and the Ramblin' Rose. These were captained by "Wild Bill" Wichrowski and Elliot Neese, respectively. While these boats are no longer featured vessels, their captains have moved on to boats that are featured (Wichrowski: Cape Caution and Summer Bay; Neese: Saga).

Other boats have been prominently featured, but not as much as the previous: Rick Quashnick's Maverick (first two seasons; Blake Painter captained it in season 3 for king crab); Harry Lewis's Incentive; Wade Henley's Lisa Marie; Wayne Baker's Trailblazer; Larry Hendricks' Sea Star (Hendricks' crew retired, and now he captains a chase boat) and Jeff Weeks' Billikin among others.

Due to a combination of extreme situations, smartass crewmen and genuine emotion (and a need to unclutter this page), there is enough material for the show to have separate Crowning Moment pages for each of these: Awesome, Funny and Heartwarming.

In September 2010, John and Andy Hillstrand of the Time Bandit became embroiled in a $3 million breach-of-contract lawsuit with The Discovery Channel over what Discovery executives claimed was the Hillstrand's refusal to complete work on an off-season show called Hillstranded. The Hillstrands and Northwestern captain Sig Hansen released a joint statement saying that "given the current situation with Discovery", they are "unable to continue participating in Deadliest Catch," with Hansen further saying that "the captains stand together, and me and my brothers support them 100 percent." Fortunately, as of October 10, 2010 the Hillstrands and Discovery reached a settlement and all three captains have returned to the show. From here:

"We're happy we worked everything out with Discovery," the trio said in a statement. "A deal's a deal. We're heading up to Dutch Harbor to start filming the new season of Deadliest Catch and hopefully it will be the best one yet."

Through season 9, some major developments that affected season 10 played out behind the scenes: Josh Harris and Michael Fourtner left the Time Bandit (the former was running the back at sea Cornelia Marie, though the ship was not featured in season 10; the later opted to leave the Time Bandit in order to be close to his family, after learning that his wife was expecting twins). Furthermore fan favorite Jake Anderson is no longer a crew member of the Northwestern, having left to work on a new boat, run by a company that (while offering limited filming in season nine) has declined to allow Discovery to continue filming come season ten. But since Jake's back on the Northwestern, that doesn't really matter.

Before season 10, several other changes happened in the fleet. Jake Anderson left the Kiska Sea and returned to the Northwestern, displacing greenhorn Nick Tokman, who signed up with the Time Bandit (but then returned to the Northwestern for Opies). Josh Harris bought the Cornelia Marie outright, but the boat will only be crabbing during Opilio season, and Sig Hansen's youngest daughter Mandy is trying to join the Northwestern as a deckhand (she has in the past helped run the boat in the summer when it does salmon tendering). Additionally, Seabrooke captain Scott Campbell suffered a herniated disk in his lower back, and was forced to leave the boat before the end of the king crab season to undergo spinal fusion surgery. With him still recovering, the Seabrooke isn't taking part in the opie season. Over on the Time Bandit, Johnathan Hillstrand was advised during the off-season that his health really isn't very good at the moment (extremely high blood pressure and several other problems related to a decades-long chainsmoking habit) and he decided to take opies off in hopes of helping to correct his health issues.

Season 11 brought even more changes, namely Scottie Hillstrand moving off the Time Bandit and onto the Cornelia Marie. He'd been fired the previous season after trying to lease some of the elder Hillstrands' quota so he could use it as leverage to get a captain's position on another boat. Andy, in particular, didn't appreciate what he saw as a younger generation's attempt to force the elder generation out. The Seabrooke is also no longer a featured boat. Jake Anderson also finally achieves his dream of being a crab boat captain when he steps up to take command of Saga from Elliot Neese.

Season 12 brought about significant changes to the boats on the show, with many deckhands being replaced over the break. Jake Anderson is now officially the Captain of the Saga, Elliot having been bought out by his partners. Casey and Josh found themselves having to sell off a majority stake in the Cornelia Marie to finance a major overhaul and find themselves worried about whether or not they'll be able to keep their jobs and the boat. Also, joining the fleet was the Brenna A, normally a salmon tender, captained by Sean Dwyer who, at 23, was the youngest captain in the fleet by far.

Cape Caution was no longer featured after Season 12 when Wichrowski moved to Summer Bay, which took the former's place as a featured boat. Brenna A was no longer featured after Season 15. During Season 17, the fleet was rocked at the start of the opilio season when it received word that Summer Bay deck boss Nick McGlashan died of a drug overdose in Tennessee. Season 18 sees the fleet struggling with Alaska's shutdown of the Bristol Bay red king crab fishery for the 2021–22 season, the first such closure in 25 years.