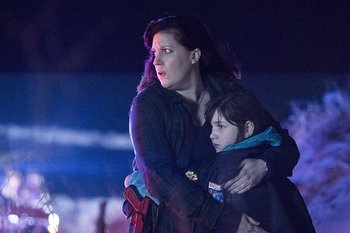 During a freak power outage in a small town in Long Island, a plane crashes into the beach. The only survivor is a little girl with amnesia but no visible injuries, and local Chief of Police Jo Evans decides to take her in until she recovers. However, the little girl, who adopts the name Piper, soon attracts the attention of a shadowy organization or two, and Jo, her estranged husband Alex, her father Ed, and her daughter Mia must protect Piper.

It was cancelled after one season.

Tropes which have emerged in Emergence include: