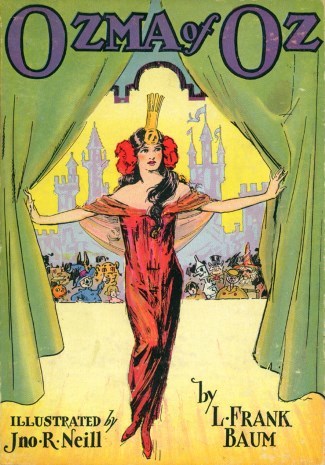 Ozma of Oz is the third book in the Land of Oz series by L. Frank Baum.

This one brings back Dorothy Gale, who did not appear in the second Oz book, The Marvelous Land of Oz. In this story, Dorothy and her Uncle Henry have taken a ship to Australia to visit some relations. Dorothy wanders on deck when she shouldn't and winds up being blown overboard in a storm—luckily for her, along with a chicken coop that was tied to the deck. Dorothy is adrift at sea in her chicken coop, along with a chicken, who starts to talk. Dorothy and Billina the chicken eventually drift to land, where they find themselves not in Oz, but in the similarly strange and wonderful Land of Ev. After being hounded by the Wheelers, a people with wheels instead of hands and feet, Dorothy discovers the clockwork robot Tik-Tok, who helps clear away the Wheelers. Dorothy goes to the castle of Princess Langwidere for assistance, a narcissist who collects heads and switches them with her own at will. After Dorothy refuses to trade her head for one of the princess's, she imprisons Dorothy. And as the title indicates, eventually Dorothy has a rendezvous with Princess Ozma, the heroine of The Marvelous Land of Oz, who travels to Ev on a mission to free their royal family from the clutches of the Nome King. Ozma frees Dorothy and she accompanies them to the Nome King's dominions. The Nome King has transformed the royal family of Ev into inanimate objects, and challenges the Oz citizens to guess which of his objects are the royal family; at the risk of being transformed themselves if they guess incorrectly.

The novel marks the beginning of Baum's intent to make the Oz books an ongoing series; something he was not always fond of having to continue. Here he brings Dorothy back by popular demand, and backtracks on some of the elements which his fans disliked in the second book. The Nome King goes on to be a recurring villain in the series. The movie Return to Oz is mainly an adaptation of this book, with some elements from the previous book added.