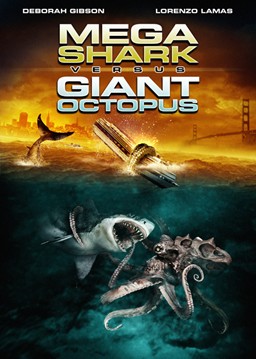 "Holy shit!"
— Airline passenger, about to be eaten by a 50-ton Flying Seafood Special With Teeth.
Advertisement:

An Exactly What It Says on the Tin movie, clearly aiming for Cool Versus Awesome. Whether it reaches that is up to you.

A prehistoric giant octopus and a megalodon shark have been frozen in an Alaskan glacier for millions of years when they're suddenly freed by illegal sonar experiments / a panicked pod of whales / a crashing helicopter / global warming / ice melting due to the proximity of a Hot Scientist in a minisub — it's not clear which. They immediately take up where they left off — eating everything in, on, and even above the ocean in order to fuel their vast bulk. Two Hot Scientists, a Professor and a Jerkass Man In Black— aided by the US and Japanese navies — team up to combat this undersea menace.

As with most Asylum films, the action sequences are few, and rely on terrible CGI, but the writing and acting are dramatic enough to endear it to some fans, particularly those of the Kaiju genre.

Followed by Mega Shark vs. Crocosaurus, Mega Shark vs. Mecha Shark and Mega Shark vs the Kolossus (which is The Mockbuster to Attack on Titan, with the title opponent being a Humongous Mecha version of the Colossal Titan)

The Angry Video Game Nerd, on Cinemassacre, has reviewed this movie in "Top 40 Shittiest Shark Movies."

It seems to have spawned a subgenre of its own, as there are now several other films of the "Mega [Insert Animal Name]" variety, including Mega Python vs. Gatoroid. The two animals were even merged in Sharktopus, by another studio.

The first sequel contains examples of:

The second sequel contains examples of: