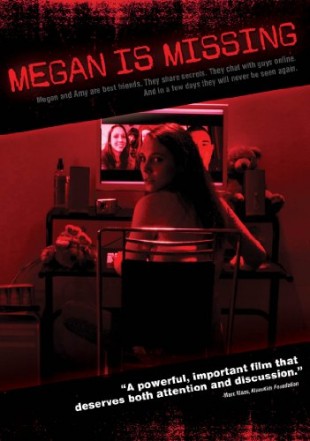 Megan and Amy are best friends.
They share secrets.
They chat with guys online.
And in a few days, they will never be seen again.
Advertisement:

Megan is Missing is a 2011 horror drama about two teenage girls who encounter an internet predator. It was directed by Michael Goi and stars Amber Perkins, Rachel Quinn, and Dean Waite.

Megan Stewart is a promiscuous 14-year-old girl with a troubled past. Her best friend Amy Herman is unpopular and socially awkward and clings to her relationship with Megan as a lifeline to social acceptance. They go to parties, chat on cell phones, share secrets with each other, and spend time online. One day, Megan is introduced by an online friend of hers to a boy by the name of Josh. The two of them bond quickly, and Megan finds herself attracted to him, telling Amy about him and eventually agreeing to meet him. Megan vanishes soon after, never to be seen again.

The police investigate her disappearance, but with few to no leads, they begin to assume that nothing untoward happened to her and that she simply ran away. But Amy believes otherwise, and after a chat with Josh raises suspicions about Megan's fate and security camera footage reveals that Megan was abducted, Amy reports him to the police, which re-sparks the investigation as she begins to keep a video log of her feelings toward the turn of events.

But as the kidnapper's attention turns towards Amy, nothing can prepare her for the horror to come, and she may well end up the next one to disappear forever...