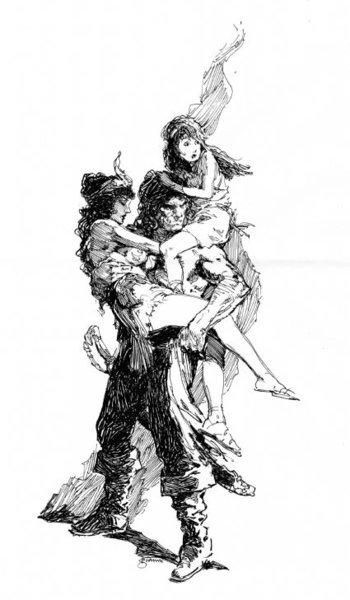 Fleeing from Pictish warriors, Conan climbs onto a rocky outcrop that his pursuers won't enter. Deciding to investigate, he discovers a room full of treasure, but impossible to enter due to a deadly gas.

Conan wanders to a nearby fort, where resides Count Valenso, a nobleman on the run from a demon, and his niece Belesa and the rescued slave child Tina who Belesa has taken on as her ward. Recently, not one, but two pirate crews have docked at the fort, searching for the legendary treasure of Tranicos. In order to kill two birds with one stone, Conan turns the pirates against each other and leads them to the location of the treasure. All the while, Valenso is growing more delusional, especially after Tina claims to have seen a black figure on the shore.

After coming to blows with the pirates, they are beset upon by Pictish warriors. Conan, realizing they are heading for the fort, runs back as fast as he can to save Belesa and Tina. As the fortress burns around them, the two females are helpless as the black stranger finally reveals himself. Conan battles the demon, and, with a girl under each arm, leaps the walls of the burning fort and makes for the high seas, promising to give Belesa and Tina the new life they had dreamed of.

In the de Camp story, this ending is changed to Conan meeting with the lords of Poitain off the Pictish coast, looking for him to be their leader in a revolution against the Aquilonian king Numedides, which he accepts. Tranicos' treasure is then used to finance the rebel army that overthrows Numedides and brings Conan to the throne of Aquilonia.

Alternative Title(s): The Treasure Of Tranicos