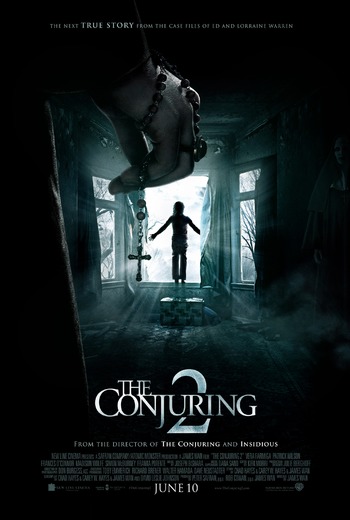 Following a disastrous experience in Amityville, Ed and Lorraine Warren (once more played by Patrick Wilson and Vera Farmiga) have more or less called it quits on the paranormal investigation business. That is, until they get word of a haunting in the small British town of Enfield, where a family is being tormented the spirit of their house's previous owner. The Warrens quickly emerge from their 10-Minute Retirement and agree to help the family. Throughout all of this, however, Lorraine finds herself tormented by an entity of her own, a mysterious demonic nun...

A sequel, The Conjuring: The Devil Made Me Do It, was released on June 4, 2021. A Spin-Off Prequel, The Nun, was released in 2018, while a second spinoff, The Crooked Man, fell into Development Hell.

The Conjuring 2 contain examples of: