Film / The Conjuring: The Devil Made Me Do It 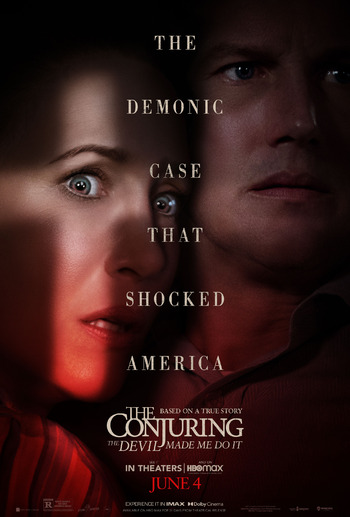 The Conjuring: The Devil Made Me Do It is a 2021 horror film. It is the third film in the mainline Conjuring series, and the eighth film overall in The Conjuring Universe. Michael Chaves (The Curse of La Llorona) takes over directing duties from James Wan. As with the rest of the 2021 Warner Bros. film slate, it was simultaneously released in theaters and on HBO Max for a 31-day period.
Advertisement:

The film dramatizes the 1981 murder case of Arne Johnson (Ruairi O'Connor), who killed his landlord under demonic possession. Ed and Lorraine Warren (Patrick Wilson and Vera Farmiga) investigate his case, uncovering a link between Arne's possession and a previous murder that goes back to a dark curse that the Warrens must stop before it's too late for Arne.

The Conjuring: The Devil Made Me Do It contains examples of: