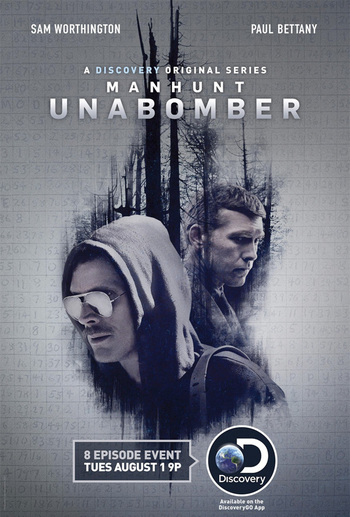 Manhunt: Unabomber is the first eight-episode season of the True Crime Docudrama anthology series Manhunt. It dramatizes the FBI's hunt for American luddite terrorist Ted Kaczynski, a.k.a. the Unabomber, played by Paul Bettany. Sam Worthington stars as James "Fitz" Fitzgerald, a rookie FBI profiler brought aboard as a document analyst who starts developing a profile of the killer based on what he calls "forensic linguistics." His boss (Chris Noth) is constantly skeptical, but Fitz becomes obsessed with the case, to the detriment of the rest of his life. The show also has a parallel story running two years later, as Fitz tries to convince the captured Kaczyinski to plead guilty and avoid a media-circus trial.

Manhunt: Unabomber was first aired by the Discovery Channel in 2017, but the channel bailed out around the time of release and put the continuation of the series in jeopardy. Following acclaim, it was picked up by Netflix for airing in some countries, before Starz uncancelled the show and aired a second season, Manhunt Deadly Games, in 2020.