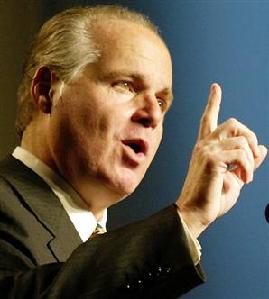 *
"Not since Jesus Christ has the world seen someone
With such widely syndicated views
Hundreds of years from now they'll celebrate Rush-mas
And Rush Hashana for the Jews."
—The Greatest Man in America, Moxy Früvous

Best known for his self-titled radio Talk Show, The Rush Limbaugh Show, Rush Hudson Limbaugh III (January 12, 1951 – February 17, 2021) was a well-known American conservative pundit who was not shy about his viewpoints. He has been credited with reviving AM radio and pretty much laying down the standard for the modern day political talk radio program. From 1992-1996, a television version of his show was broadcast through syndication. He also briefly served as an ESPN football commentator in 2003, though he resigned several weeks into the season after making controversial remarks about the press coverage of quarterback Donovan McNabb.

Like any other political pundit, Limbaugh's stock in trade was controversy. As such, he made a number of extremely provocative statements, and was alleged to have made others which strain the limits allowable to controversy. At least some of his opponents either quoted him out of context or even completely fabricated statements, though others claimed that Limbaugh fabricated similar statements himself.

Among the features that listeners to his show were quickly able to recognize were the numerous phrases he made up to use to describe certain things he talked about (such as "Drive-By Media"), his backchat with call screener Bo Snerdly, and the parody spots he played from Paul Shanklin.

After a battle with Stage IV lung cancer, Rush Limbaugh passed away on February 17, 2021 at age 70.

Not to be confused, were such a thing possible, with Rush.

Opinions of Rush Limbaugh and his views are sharply divided and often extreme, so please use Rule of Cautious Editing Judgment when adding Tropes. Note that a similar page for Alex Jones (often considered to be Rush's heir apparent) was deleted for this exact reason, due to it becoming overly editorialized and negative.