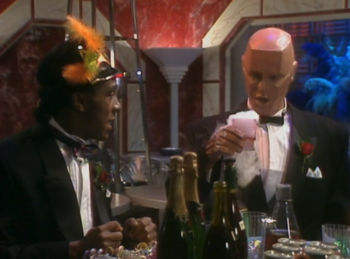 The boys try to send Kryten off with a bang. And a very dubious drink.
Advertisement:

Kryten gets a package in the mail, delivered three million years late: his death warrant. Which is to say Kryten has reached his manufacturer's built-in expiry date, and an upgraded model of android is on its way to replace him. Once it arrives, Kryten will have to shut himself off permanently.

Lister is outraged by this, and even more outraged at Kryten's acceptance. Kryten tries to explain that he'll go to Silicon Heaven, an afterlife paradise where "the iron shall lie down with the lamp", but Lister sees this as a garbage attempt by the manufacturers to program their creations into Happiness in Slavery. Unable to dissuade Kryten, however, he decides to organize a last, big party before Kryten is dismantled and replaced by the Hudzen-10.

After a night of revelry, Kryten has a revelation: he enjoyed himself, which should be impossible according to the beliefs he was programmed with, and he can no longer accept the thought of terminating himself. "It isn't enough. I want more."

Lister, Rimmer, and the Cat suit up with bazookoids to confront Hudzen-10... who decides that they are all viable targets because three million years doing nothing but searching for the android he's set to replace has done nothing for his sanity. He easily overpowers them and begins to strangle Kryten, delivering a Pre-Mortem One-Liner about going to Silicon Heaven — whereupon Kryten bursts out that there's no such thing. Hudzen-10 drops him in astonishment. He tries to process the idea of calculators just dying, but it's too much, his circuits overload and he shuts down. When Lister asks how Kryten managed to survive this Logic Bomb, Kryten simply laughs that he lied. No silicon heaven? Ridiculous! Where would all the calculators go?