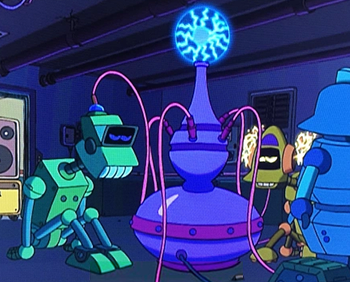 "Bender Rodriguez, you are charged with petty larceny, possession of something analogous to drugs, and assault with a smelly weapon. How do you plead?"
— Judge 724, Futurama, "Free Will Hunting"
Advertisement:

All throughout human history, people have been using mind altering substances. So if artificial intelligence progresses to the point of true sentience, why would the same not hold true? The means would likely be different, the use of programs, viruses, or electrical surges, but the effect would be the same. The lure of drugs is instant, intense gratification, and if said AI is capable of feeling pleasure, there is no reason why they could not find ways to achieve the same result.

Note that this trope includes only examples of AI experiencing direct analogues to humans getting drunk or stoned. Examples of AI acting strange because of breakdowns or corruption are not examples.